King of the High C's

Arr! Kenny had the great opportunity to be part of the stellar 2nd Grade play, “Pirates,” at school last week. (Yes, we are homeschoolers, but the boys attend the local elementary school part-time for PE and music and a few extras…it’s working out wonderfully!) 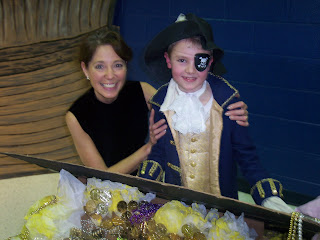 The amazing music teacher does a musical with every grade every year. Kenny auditioned for a speaking part and was chosen to take on one of the lead roles as the KING of the High C’s…basically the King of the Pirates whose beautiful voice is supposed to help the pirates win a singing contest until he gets laryngitis at the end. Kenny had several lines to memorize as well as a few vocal solos. He did a fantastic job! Way to go Kenny!! 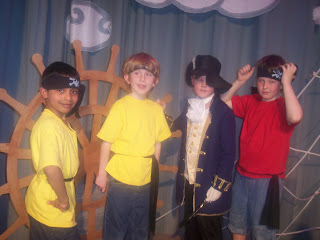 He had a great time wearing the fancy costume that was custom made by Grandma...thanks again, Grandma!
We're sure it will be worn by generations to come...
Posted by Smith Moments at 7:05 PM

I am so glad that you have been able to work out with the school to do those "extra" things that for me always seem to never happen. We are trying public school for this year. So far the kids have had a blast but we shall see what happens next year?