Brent and I celebrated our 12th Anniversary this past weekend.

Brent is an incredible husband who has service at the front of his mind…it is part of who he is…it is what attracted me to him years ago…and it is what has made our marriage stronger with every passing year.

I thought I’d  become mentally tough in supporting him in these worthy causes, especially after a high adventure trip many years ago turned into a group helicopter rescue while I was home pacing the floor with two young boys wondering why Daddy was so late returning home. (Don’t worry…Brent was fine…he just had to assist a couple of boys who had developed hypothermia after narrowly escaping a whirlpool in the Pacific Ocean.)

Well, a couple of weeks ago we started discussing the possibility of helping his scouts raise summer camp money by baking cinnamon rolls for Mother’s Day. Boys and Moms would have an adventure making them together at our house the day before Mother’s Day—except the day before Mother’s Day was OUR anniversary.   My heart did a flip-flop and I must admit the “What about me and MY needs while I’m 7 months pregnant and hoping to milk the weekend for all it’s worth because it’s my anniversary AND Mother’s Day?!!” thoughts circulated for at least a day and a half.

But then I thought again…what better way to celebrate our mostly blissful years than to do a service project together? I’m a big fan of symbolism. And…what a creative husband I have…we don’t have to plan something extravagant and risk high hopes that it will fulfill great celebratory measurements in comparison to past anniversaries or to the Jones’ fancy outings.

So cinnamon rolls it was.

It was an honor (and extremely exhausting) to serve and support Brent in his charitable endeavors—something that truly makes him happy—on our special day. I’m usually the recipient of Brent’s service. It was nice, and very fulfilling, to catch up a little. 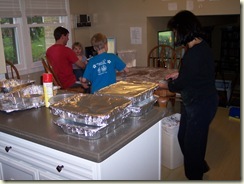 Except sales were so successful (89 orders with very little marketing efforts) that a friend volunteered to help with 1/2 the orders. So, my title is deceiving…we really only had to do 9 batches of dough to make 45 pans with 10 rolls per pan, which = 450 cinnamon rolls, plus the other 450-ish rolls, which = more $$ than they were hoping for originally, lots of happy mothers (and fathers who don’t have to worry about burnt toast), and no more fund raisers for another year. Yippee! 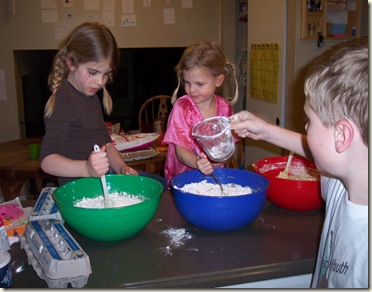 We had lots of help from the kids, too!

And because Brent is extra in tune to my emotional state, he brought home 24 roses the day before the big event—12 for our anniversary and 12 for Mother’s Day. I’m not normally much of a flower lover (I like practical gifts like new rags or my annual pair of cheap flip flops), but this time flowers made the tears come… 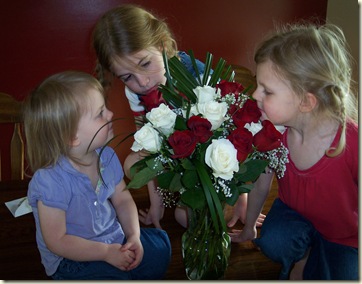 The girls thought the flowers were very romantic.

And guess what we had for breakfast on Mother’s Day?? 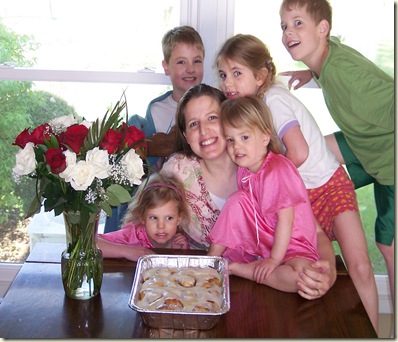 Posted by Smith Moments at 9:20 PM

WOW!! I have to say you are one AWESOME wife/momma!! Way to go! Love peeking in on you guys and your fun adventures. xo

You guys are ambitious. Our scouts just aerated lawns. What is it about some men and scouts? It is like there is a fleur-de-lis on their foreheads, that Bishops can see. (Doug has been scoutmaster for 10 of the 13 years we have been married, and two of those off ones, we lived in Wymount.) I bet Brent is a superb scoutmaster.

Amy, you are A-MAZ-ING!!! And so is that sweet hubby of yours. Glad you're all doing well. Good luck getting through the next couple of months and having a new little addition to the family:) BTW, this is Aunt Debi (a different Nana:)