Kirsti turns 8 in one month. We're excited for her baptism on July 7. Along with many local relatives, Nana and Papa and Cousin Katy (age5) are coming all the way from AZ to share in the occasion with us. We're all thrilled. (If anyone else wants to come...you're welcome, too. We'll even feed you treats afterwards.)

Kenny was baptized when he turned 8 over 3 years ago. It was a wonderful day.


And for the record...Douglas H. Smith, one of the most genuine, thoughtful souls I know, also chose to follow in Jesus' footsteps. He was baptized by his father just after his 8th birthday...nearly two years ago...and I never wrote about it. And while I'll never aspire to even all scores throughout my children's lives (I think we would all go crazy!), I will take the time to even this one.

It's a treat to reflect on such a great day...and highlight such a great kid, especially during his birthday month. 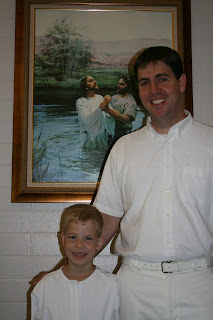 Diggy is dedicated. In conjunction with his baptism, Diggy decided to read The Book of Mormon...by himself. That was a big goal for a young boy who struggled through reading during his early elementary years (creativity and climbing are his favorite subjects...see below). But for the past two years, he's read every day. He's almost done. He sets his alarm to wake up at 5:45 for early morning scripture study alongside Kenny and Brent. (I know that sounds too good to be true...but it IS true...so I'm going to brag about it...I have 2 pre-teen boys who choose to wake up super early and start their day in the scriptures!! And the boys started this habit on their own long before we recognized it as a great bonding opportunity with them...so Brent was elected to join them...every day...at 5:45 a.m. (Have I ever bragged about what a great husband I have?! I probably should sometime. ;)) 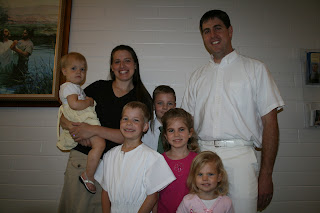 Picture taken at Diggy's baptism. It's hard to believe we didn't have MaryAnn.
We didn't even know back then how much loveliness she'd bring down from Heaven with her.


To highlight Diggy's genuine thoughtfulness (of which I truly admire)...

About the same time Diggy thought about being baptized, he also thought seriously about becoming vegetarian...to do his part in respecting and preserving life. He used to love hamburgers and chicken...but hasn't had meat in two years.

When an ant or spider finds its way into our domain, the girls scream and Diggy comes running to rescue everyone. He scoops the innocent perpetrator into a paper cup and gently releases it into the wild. (Sometimes I feel guilty for squishing the ones I find.)

One time, I told Diggy to run out front and scare the squirrel away from digging in our garbage (we don't have the big green cans in our neck of the woods). A few minutes later, he came inside with a grin on his face. He said he'd approached the squirrel carefully. When he was close enough, he gently said, "Squirrel, can you please stop eating our garbage?" The squirrel cocked its head towards Diggy, gazed into his eyes for a moment, and then calmly scampered off (without even the slightest rise in its stress hormone level). 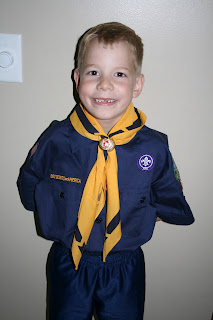 Turning 8 marked the beginning of Cub Scouts, too. Diggy loves Cub Scouts...except for fishing. Imagine his horror when asked to bait a live worm onto a hook. He's obedient. So he did it. But he promptly came home, sat in the rocking chair to think for a long time, dug for his wallet, and scheduled a time with Dad to buy some fake worms with his own money. (Sometimes I call him Mr. Preparedness...because he's always planning ahead, preparing to handle sticky situations with confident finesse.) The Cub Scouts have fished several times since. Diggy brings his fake worms. He's never caught a fish. And he's very glad about that.

One time while fishing, a minnow floated on its side at the top of the water. It looked sick...or even dead. And then suddenly it flipped over and swam away. Brent jokingly concluded that Diggy must have prayed for it. "I did," Diggy smiled.

Diggy is a peacemaker. He's full of faith. He likes to run. Nothing he creates is "in-the-box". He climbs everywhere. He has an awesome collection of toy animals. He takes excellent care of his hand-made giraffe, Gerry. He plans his birthday schedule and recommended presents months in advance (coming soon...can't' wait!). He thinks of everything...and everyone. And he's a Mormon. ;) 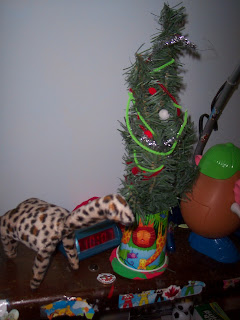 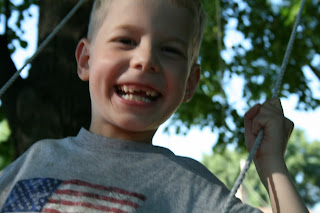 It is an honor to be your mother, Diggy.
Time sure flies.