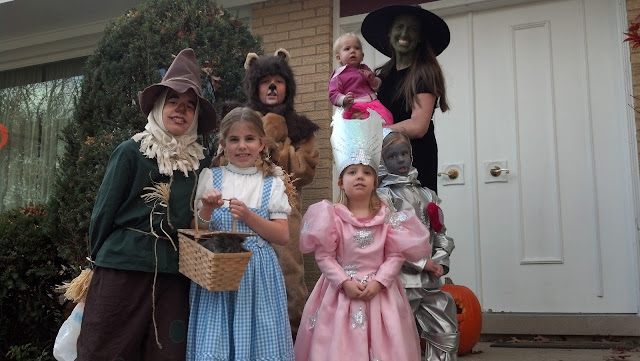 **Kudos to Grandma for making us look so authentic. She hand-sewed these incredible costumes. Simply amazing. The kids truly think Grandma can make anything. I think they are right.

**My face sure looks way greener than when I was standing in front of the mirror watching Kirsti smear goop on me...or maybe my arms just look whiter. After seeing the above picture, I now understand some of the comments from the neighbors. 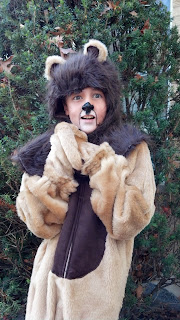 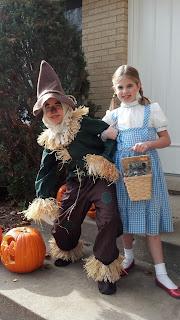 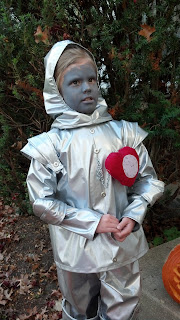 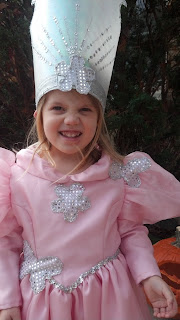 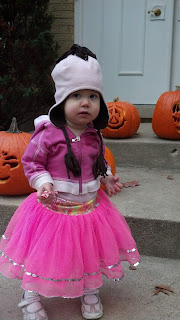 **MaryAnn's at a risky age for costume-wearing...would she, or wouldn't she?? By choosing the jump-on-the sibling-bandwagon-only-have-to-slip-your-feet-in approach, I think our Munchkin scored some big Halloween memory points. Her mirror neurons (she was so pleased to be mimicking siblings) and her amygdala (she wasn't too thrown off by the increased diameter around her waist) seemed pretty content. Wheww.

**Speaking of risky age...upper elementary school/middle school/high school/adulthood are also risky costume-wearing ages (but for reasons other than the fear of something poofy being forced over your head). I'm slightly stunned that all my kiddos truly love transforming into something magical of their own free will. Excitement in the bathroom during prep time was genuine (and quite contagious) by young and old alike.

**And there's nothing more risky in middle school than not having what all the other middle school kids have (or at least say they have)...PartyCity was sold out of Morph Suits in the 6-8 grade sizes. Feeling quite relieved that Kenny had to settle for just the mask as his daytime costume to wear to classes. The full-body suit would most definitely have gone down in history just like the puffy bangs of my middle school days did, which I now have to live with forever. 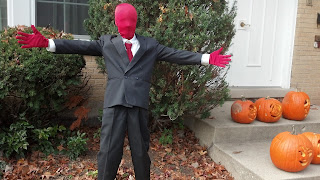 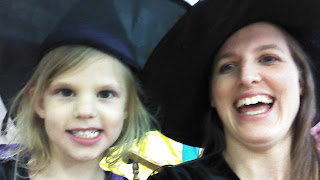 **Assisting at Allison's kindergarten party was worth every minute of my precious time.  I kept hearing her say, "I'm so glad my mom's here!" Fun to watch her among her peers.


**Smells and textures of pumpkin-carving time provide lifetime memories. The 3 oldest carved alone. Bravo! Brent and I helped the 3 three youngest feel as if they had carved alone. They felt equally proud of the final results. MaryAnn included herself by pounding on the pumpkins. Warms my heart. And Cienna's gourmet soup made plenty of servings for everyone... 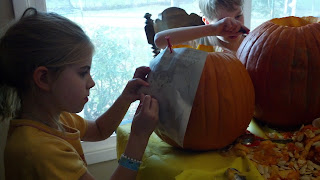 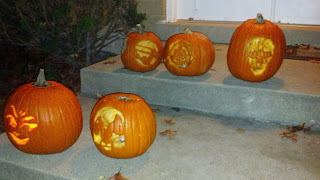 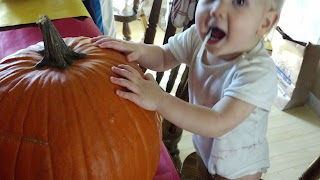 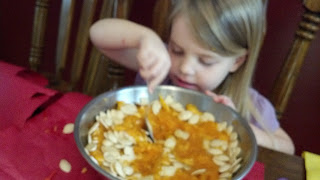 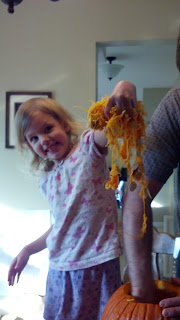 **With children that dress up year-round and can frequently be seen parading around in front of the house in a variety of ensembles, it's nice to have a designated day where they can roam a little further. 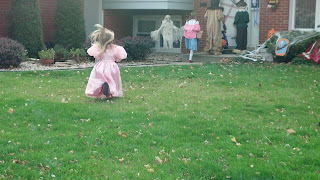 **5 kids trick-or-treating for 3 hours = more candy in my house at once than I have EVER seen! I'm speechless.


**Come family counsel on Sunday, I won't be...I predict that Family Business item: "Let's review where empty candy wrappers belong" will now remain on the weekly agenda until next Halloween with no breaks this year.