Come one, come all!!

Yesterday was an exciting day...a dream-come-true type of day...

From our early months in marriage (almost 14 years ago), Brent and I discovered that while we had many similarities (like penny-pinching, basketball, and religious beliefs) we also had several not-so-similar hobbies: 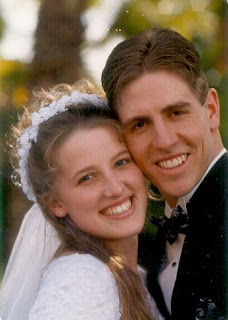 These slight differences, plus the nature of life in our neck of the woods, amounts to so many of our married hours in separate places performing very different, separate tasks. I've spent my days and years pregnant, nursing, cooking, cleaning, and reading brain books while Brent walks out the front door or around the world and steps into a business realm of people and terms very foreign to me.

As we've discussed our future together on many occasions (in other words while I've daydreamed on and on with Brent listening ;), we've tried to brainstorm ways we could bond our marriage further by working on something together...not just side-by-side in our own parallel distinct worlds...but truly together in a much different, lovely kind of side-by-side way.

My hopes were hanging on our exciting partnership in day-to-day childcare (playing tag-team in the evenings as we shuffle kids to and fro or trading turns holding the crying baby in the middle of the night) and even more so on our long-term plan to serve a church mission somewhere in the world together...after (or if) empty-nesting hits. I'm content with these goals.

We recently, however, created a new parenting/brain website (www.presentparenting.org) because we jointly agreed I should share a few thoughts and Brent knows enough 'html' to make it shine and keep it running. That counts as sort of together in my book...making me even more content.

We both sat typing away at our laptops on the living room couch with several kids playing an animal game nearby and another one sick with the stomach flu lying between us (that counts as a date, right?). After an hour, Brent gave me a smile and a wink and announced he'd created his first post for "OUR BLOG" on the web site.

So...even if Brent would rather be out jumping off a cliff, it looks like WE are taking a cyberspace ride. Now I'm far beyond content. *big smile* *romantic sigh* I have such a cool husband. And I think he's a great writer, too, if I'm allowed to vote.

Here's a link: http://www.presentparenting.org/posts-giving/theryde
(and of course he chose to surprise me and toot my horn a bit with his words. *blush* I LOVE that guy more than I could ever accurately express in words...so I'll stop typing and just go give him a big kiss!)

I'd better go strap on a life vest and gear up for getting pulled behind a boat...If Brent's willing to blog alongside me, I can be brave, too.