Kirsti reminds us that while the time between Thanksgiving and Christmas flies for those of us who have long checklists, Christmas for a four-year-old has only come four times so far and waiting for Santa to come again can seem painful. With the first signs of Christmas, (which happens right after Halloween), comes the question, “Is today Christmas?” And then, of course, “Is tomorrow Christmas?” After explanations take place, anything from snow falling to bells jingling start the questioning all over again…even if it’s just a few minutes later.

After Thanksgiving, first comes the countdown to the countdown. Luckily, this year Thanksgiving came late and we only had to wait 4 days to start peeking in the pockets of our advent calendar. When the official countdown begins, the wait is still grueling. One Sunday after church, Kirsti happily announced to everyone as we piled in the minivan to go home, “My teacher said Christmas is after today!” Yep, and after the next two weeks, too! 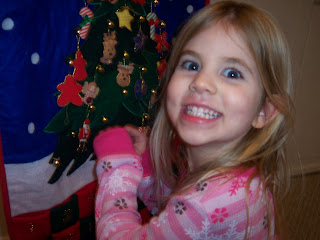 What is Kirsti so excited about receiving Christmas morning? One would think she’s asking for a new car, but no…Kirsti told Santa she would be happy with whatever he wanted to bring her, and at this magical age of four, she means it. When her logical older siblings question how Santa fits down chimneys, she faithfully and confidently demands that it’s possible. Her bubbling enthusiasm is quite contagious.
Posted by Smith Moments at 2:47 PM

I loved reading about your kids. It kept me laughing the whole time. (with how cute and creative they are)

I hope you have a wonderful Christmas! Thanks for stopping by.