When Diggy’s teacher at church asked the class yesterday if anyone had done something fun during the last week, Diggy said, “I smashed my hammer through the wall in my parents’ bathroom.” 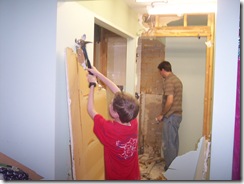 This is actually Kenny…with Brent in the background.

When we picked our house a few years back, we looked for one that needed a bit of work…because Brent enjoys tearing holes in walls and he’s quite talented at patiently inspiring the kids to work alongside him. The Perfect Modern-day Farm.

The kids were ages 6 down to 6 weeks at the time (minus Cienna). Their attention spans were quite short and needy and the projects were quite long and tedious. I remember wiping away the gritty grout residue on our new entryway tile until midnight one night, grumbling about the whole modern-day farm idea…knowing the kids would be up around 6 a.m. with lots of energy and the work not yet done.

So, after necessary roofing, flooring, painting, and some kitchen work, it’s been awhile since we’ve embarked on a major project. We’re perfectly happy with our old bathrooms…I thought.

But on Friday night, Brent started talking about the specifics of our master bath. He wants to do a major re-hall. I’d been hesitant, but finally agreed to his plans. I thought we were still months away from starting, but then again, have I ever shared how quick of a mover Brent is? Engaged after dating two months?? (Best decision I ever made!) Well, hammers went flying Saturday at noon…and THIS time, the Modern-day Farm is working at full capacity.

Brent had all 5 kids at his side for several hours on Saturday while I was out to lunch with a friend . They were all very excited to show-off their hard work when I returned…partially because I didn’t know they were going to start yet. 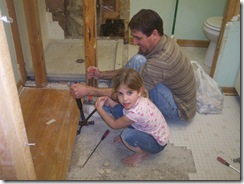 Kirsten, now the age of Kenny when we’d moved here, enjoyed several hours of getting down and dusty (both on Saturday and Monday)…hammering down walls and prying up floors. 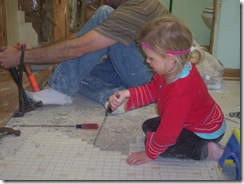 Allison chopped away like a cute three-year-old would, making up stories as she went and enjoying the mess. Apparently she was making a bird’s nest in the “sand.” After getting in PJS, she bid a sweet farewell to the little tiles she’d enjoyed all day…knowing they were getting replaced…Good-byes can be hard. 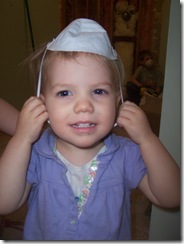 Cienna primarily enjoyed the masks…which came in handy because her other favorite part was trying to sneak “rocks” into her mouth. Cement chips and dirt inside the house…it was a dream come true! 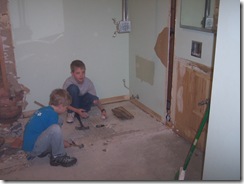 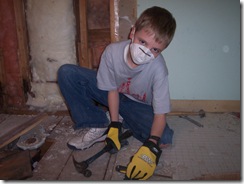 But the BIG farm story comes from our two strapping boys who never tired of  hammering, chipping away tile, and hauling debris out to the garage all day Saturday, saying things like, “We’ve really used this Saturday well” and not even wincing when their hands received the scrapes and blisters from hardy work.

And after a day of rest, they voluntarily (and with great excitement and anticipation…and we didn’t bribe them or offer any form of reward or payment) went to bed early so they could join Brent at the break of dawn (on MLK Jr. holiday)…at 5:30 a.m…the approximate time that I believe they would’ve milked cows back in the day…and they proudly worked for more than 12 hours…SUCCESS!!

(I keep saying “they” because as a pregnant mother of young children who still fall in the short-attention span range, there’s not much I can do to help…so the girls and I had another pink-nightgown sleepover in the girls’ room in order to preserve our beauty sleep amidst all the noisy hammering…another success. ;)

I’ll try to remember to post pictures of the finished project…in a few months…because tomorrow we all have to go back to our day-jobs.

Posted by Smith Moments at 5:12 PM

Just thinking about you and enjoyed looking at your blog! I loved the farm analogy! Congrats on expecting another baby!! All the best, Adrienne