Since Valentine’s Day last year, the girls have been planning and anticipating the Daddy-Daughter Princes Ball 2011 (a local high school fundraiser, which has become a HUGE memory maker for our budding queens…this was Kirsten’s 4th annual dance. Allison has gone twice now, and Cienna almost went for the first time).

The girls have been staring at the their new red Valentine’s Day dresses, with matching doll dresses, since Christmas (special thanks to Grandma and Grandpa) and trying not to wear them except to practice proper dance moves occasionally.

They counted down days, planned hairstyles, picked out fingernail polish, made corsages, and whispered excitedly to each other (especially during the final week of waiting) in prep for the big night. 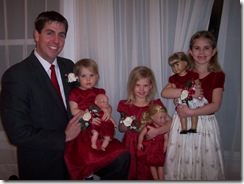 When Brent came to the front door in his handsome suit to call on his dates, he had six young ladies to court (including Baby Betsy, Sarah (Allison’s doll), and Kirsten (Kirsti’s AG doll, whom she sometimes calls Brigette after her new aunt who also has a Kirsten doll)). 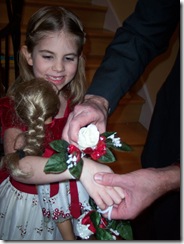 Kirsten adores the whole routine…from Dad “sneaking out” to come ring the doorbell, to the corsages, to seeing all of the other girls dressed up, to dancing with Dad, to the treats they serve, to just feeling like a princess in her Daddy’s arms. 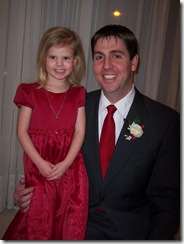 Hearing Allison’s sweet little voice discuss the Daddy-Daughter dance for the last few weeks has been priceless. As a second-year veteran, she embraced all of the evening’s events, loving her Daddy’s special attention, devouring the treats, and courageously joining the princess mosh pit like a pro.

Cienna faithfully followed in her sisters’ footsteps in preparing for her first big princess ball. Anytime the dance was discussed or practiced, she happily joined the festivities and kept saying, “I’m going to the princess dance, too!” She loved getting dressed up to match her sisters. 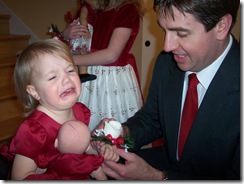 But…then it was a little weird to have Dad ringing the doorbell, and no one told her that wearing a flower on her wrist was part of the routine…and the 2-year-old tears came. And as wise parents, we foresaw that 1000 other dancing dads and daughters  wouldn’t improve the uneasiness (which is why the wise organizers have an age recommendation of 3-11…she’ll go next year).

So, Cienna felt completely included after a few pictures and a special dance with Dad at home…just for her. Then she happily chose to stay home for movie night with Mom and the boys and eat popcorn. 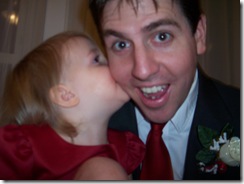 Three beautiful daughters and a husband who treats them like the princesses they are…I, too, feel like a very lucky lady!

Posted by Smith Moments at 5:14 AM

SOOO cute! I love it and wish there was something like that here! What lucky girls and what a lucky Daddy!

I love this post. Really love it.
I just can't believe how much your family has grown. When I think of you, I still think of Amy and Brent and 4 week old Diggy. I wish I could see you all more.

So, obviously I get Kenny and Diggy switched. But....I'm referring to Kenny in my previous comment. Although, I still remember being way excited when I learned you had another boy and named him Diggy.

You have such a beautiful family! I love your kids so very much! Loved this Valentine story!