Back in October, we heard that a local theater group was looking for Munchkins for The Wizard of Oz. Brent or I have never appeared in a play/musical before and neither have any of our children. BUT, since we are aspiring to become the next Von Trapp Family (kidding), we’ve got to start somewhere (and have another girl, my kids remind me). SO, our three oldest kids auditioned AND…
Oh, what happened then was rich.
All three kids were cast and for three months now…we’ve had a jolly good time in the Merry-Oh Land of Oz.
With each new rehearsal…and then tech week…and then 10 performances (spread over 3 weekends in Feb.), the kids came bounding in the house with updates on how the show was progressing. They’ve spent hours spewing out lines and dance moves…mimicking the inspiring work of so many very talented actors and actresses. In short, it’s been an awesome mirror neuron experience that may have set the stage for future Smith-kid appearances in the world of theater.
Kenny and Diggy (dark green and yellows hats) represented the Lollipop Guild and wowed the crowd with their movie-like accents, kicks, and grins. They were such a hit, they had to make a guest appearance at one of the post-show “pose-with-the-lead-characters” photo shoots. 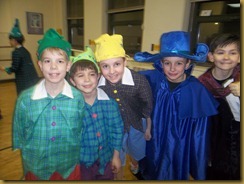 Kirsti danced her heart out as a Munchkin girl and became instant BFFs  with:

all sorts of Munchkins… 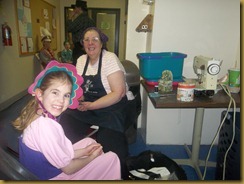 and Patty (the costumer)… 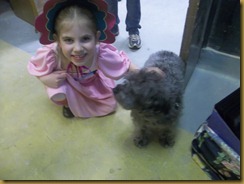 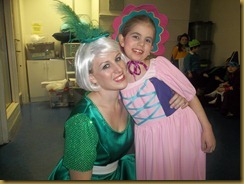 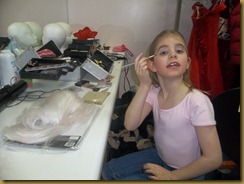 and Nickel (whose mega-make-up box has produced an exponential increase to Kirsti’s desire to acquire more beauty supplies…right away).
For Allison, waiting for the performances to start was pure torture. She very much envied her siblings night after night as they scuttled off to rehearsals. And she very much has the entire play memorized now (especially the Tinman’s tap dance routine, which mesmerized her) and rehashes most scenes hourly. Meeting the characters in person and exploring the scenery when the performances finally started was a dream come true for her! 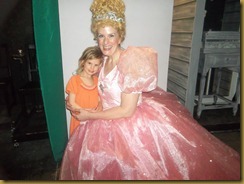 “Comimg out” of the Munchkin house
For Cienna, on the other hand, rehashing the play at home was pure delight while going to the performances was pure torture. She just doesn’t have all the advanced brain cell connections yet to help her feel like the wicked witch wasn’t after her. She begged to sit in the balcony or in the lobby…as far away from the wicked witch as we could get…so we did. And we covered eyes and ears on many occasions.
For therapy, we had Cienna meet Jody a few times off stage (with and without her green make-up on) and Cienna happily remembered that Yoda’s face is green, too, and Jody kindly explained that she loves children because she’s a grandma in real life. So, when the topic comes up now, Cienna says, “The wicked witch is a grandma,” to sooth herself, but her big eyes and stiff body language tell me that her nightmares for the next several nights will likely have something to do with Grandma turning into the wicked witch (sorry Mom). 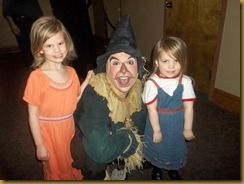 Cienna did feel a certain bond with the Scarecrow…Yeah!!

For people who are brand new to the theater experience, Brent and I found the backstage scene to be quite magical, too. We got to hear the inside scoop about when Dorothy had the ruby slippers on the wrong feet for several scenes or when one tree threw an apple that actually rebounded off the Tinman’s head and hit the cello player in the pit. Brent helped fly people across stage a few times.
I collected a few fun memories…From pre-performance energy circles to helping Glinda zip up her dress in time to bow…not to mention reliving, alongside my children, the pre-teen thrill of rubbing shoulders and establishing a first-name basis with Dorothy, et al. It was a delight to get to know the “movie stars” behind the scenes.
Most of all, I loved watching my kids interact with so many wonderful people. At home, I love hearing the kids talk about Shannon (Dorothy) and Jeff (Lion) and Mary (Glinda), etc. as if they’ve known them all their lives. Once I heard Allison say to Cienna, “You be Shannon and I’ll be Kevin (Tinman).”
It was an incredibly impressive show. We are thrilled to have many more friends that my kids insist I become official FB Friends with so we can track their future stardom.
We’ll miss the Land of Oz.
To the cast/crew: your singing, dancing, and acting onstage and your smiles, hugs, and well-wishes (and sewing) backstage have inspired my children forever. Thank you! We’ll miss you most of all… 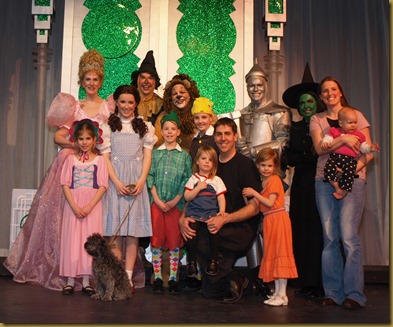 Posted by Smith Moments at 6:33 AM

How fun! This looks fantastic. So glad your kids got the experience.

Your kids were the highlight of the show! I laughed every night that they did their scene! What a small world, I homeschooled all my kids until my oldest (now 20) went to high school and then the 3 oldest went off to school. Camryn was only homeschooled for kindergarten, though. It was so nice to get to know you and your family.