Well...I probably don't have to explain much about how Brent spent his time while I was in New York City two weeks ago. After he shooed me off onto the plane, he shed his yellow-tinted computer glasses, ripped off his white shirt and tie (just like Superman...you should have seen it *wink wink*) and transformed into SuperBrent...he cooked, cleaned, taxied, read stories, played games, helped with homework, and even convinced the library lady to check out a movie to a dad without a library card or account who was home alone with 6 kids. Sold. 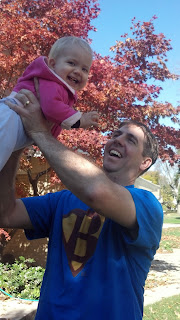 The arrival of this new birthday T-Shirt** was just in time for such an extravaganza.

But for his new day job, Brent has chosen to lend his time and talents to LED Industries, a start-up company in Lake Geneva, WI where my dad is CFO. They have an awesome product. Best in the market. And Brent hopes his big business experience (director level at IBM and Motorola) will assist them in getting off the ground. 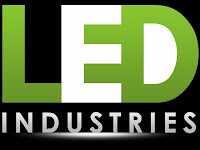 LED-Industries sells cutting-edge LED lights that snap right into existing outdoor light fixtures. Their lights save the environment and save their customers (like airports, parking garages, car dealerships) big $$ on electric bills.

Below is a Before (on the left) and After (on the Right) pic. 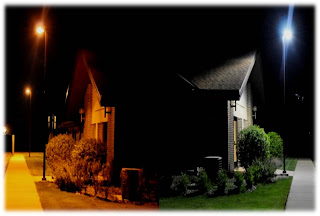 I think it's cool that he works for the company whose lights light up this beautiful building in Nauvoo, IL. 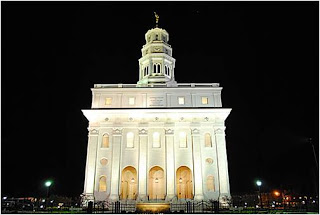 The guest bedroom is Brent's new office. And with all the button-pressing he has to do, it's a good thing he has more than one secretary. 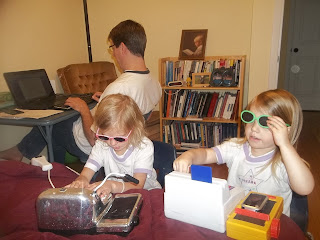 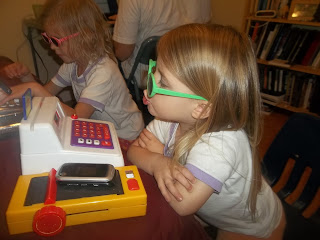 There's no paycheck yet (which makes the hundreds of hours so far on this adventure feel more like a sabbatical than a job...woohoo! well, kinda). But we're certain that this is the Lord's path for us for now.

We are grateful to have followed wise, scriptural guidance to store away surplus in our "times of plenty". We plan to live off of the extra the Lord has blessed us with in past years (as opposed to government unemployment, church, etc.) until we feel His nudge to change directions again. That could happen soon or not. (Though unsolicited, Brent has had a few interviews. So, we're keeping doors open and will keep praying for inspiration.)

We hope to offer God our time and talents always...but particularly for the next few months when our time is a bit more at our discretion. Any suggestions?? 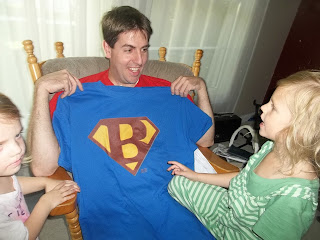 **Story behind the shirt: A few months before Brent was laid off, we discussed future plans and joked that if the Golden Handcuffs ever set him free, then he could just be Superman (there's a much longer childhood story that I won't explain now that would explain why we thought that was a clever idea.). He could keep busy pretending to have a job and then when wind of an urgent need came, he could swoop off and do what he lives for: Helping People. I like to write (and apparently we're theater people now), so playing Lois Lane sounded like fun. Just trust me...it was funny at the time.

Anyhoo...Brent's birthday came shortly after he started working upstairs...and he's had a bit more flexibility to fly to the rescue when friends were in the hospital or in need of moving some furniture (or when all hands on deck are needed in the kitchen!). So, I couldn't resist... 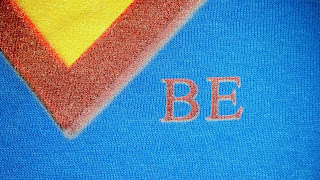 In place of the TM symbol at the bottom...is the word BE. Because now that Brent has some freedom from the Golden Handcuffs (at least for awhile), he can just BE Brent.

To me, Brent IS Superman...he keeps sweeping me off my feet and taking me on a fabulous journey.

The view from his arms is awesome.
Posted by Amy at 1:05 PM

I should tell Richard to go work for Unruly Studios...

may be useful for all, helpful article once and pardon me permission to share also here

given article is very helpful and very useful for my admin, and pardon me permission to share articles here hopefully helped Cara mengatasi rematik