I went on an adventure this last weekend. I kissed my Hubby and Kiddos goodbye and joined the rushing winds of people bustling to and fro at O'Hare airport on Thursday afternoon. Then I hopped over to NYC to attend my beloved friend's wedding. 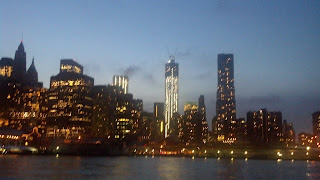 Kirsten was my first roommate at BYU. She bragged about Anahiem, CA weather. I boasted about the Chicago Bulls. We both had waist length hair and became instant Besties. I remember lots of laughing during that cherished freshman year. I didn't have a sister growing up...but I can imagine what having one would be like. 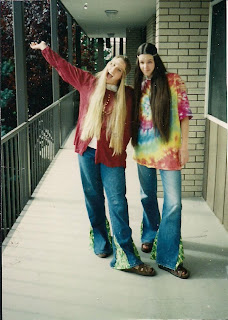 This was taken around Halloween...we didn't normally dress like this. ;)

After my sophomore year, the man of my dreams swept me off of my feet and whisked me away into the night as cans rattled against the pavement. (He became an awesome roommate, too!) Brent and I joked with Kirsten that we would name our first daughter after her. Our Kirsten is now 8.

I wouldn't miss Kirsten's big day for anything.

But heading to the Big Apple to witness Kirsten and Wil become eternally united meant jumping out of my familiar fishbowl and into a sea of New Yorkers...and leaving my Precious Minnows behind.

(side note: Besides a couple of postpartum hospital days, I haven't spent a night away in over six years...let alone TWO nights! Staying close to home is my choice...I don't like to leave my littlest ones for more than a few hours.)

So...Walking into the crowded airport, I felt lonely a midst America's business folks. So few children. So little spontaneous light in people's eyes. I missed sharing my personal space with people who innocently depended on it. Nobody clung to my leg to show me how odd it feels to empty pockets and strip off my belt and shoes to expose my body through a machine in front of an armed stranger. No one tugged on my pants to show me a demonstration of how airport workers use light sabers to communicate with pilots. Nobody begged for a bite of my mouth-watering cinnamon pretzel from Auntie Anne's. I had to eat it all by myself.

Once in New York, I faced the intimidating task of navigating my way to Kirsten's bridal shower. I found a few nice New Yorkers who explained the MetroCard and how to get one. Then I mingled with a crowd of people waiting by the "Public Bus" sign. With my only belongings strapped to my back, I studied maps and confidently moved with the herd that began a stampede when the Route B bus came to a stop. I didn't make it on...which was lucky...it was the wrong bus.

The correct bus came by a few times in the next 45 minutes...but was full and didn't stop.

Finally, the chance to ride a New York City bus came. It was standing room only...very authentic. The hour-long ride made my tired legs feel proud (and the people around me glad I'd used Dial). A talkative lady from LA relieved my friendlessness. I found out all about her daughter at Columbia University and after discovering that my religion might have something to do with my bright smile when mentioning that I have six children that I miss so very much, she asked me if I liked "The Book of Mormon" musical and Mitt Romney. I said from what I know about them...mostly no and mostly yes.

Because of my handy dandy Droid Razr, the nearly empty bus towards the end of the route didn't make me nervous. I sat with confidence (and maybe even arrogance) as I kept watching the blue arrow on my Maps App move closer to the red pinpoint "A". After exiting the bus, I descended some Manhattan stairs and jumped on THE subway. How cool is that? 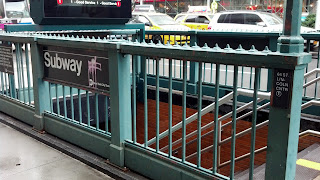 I quickly figured out that the big numbers decorating the walls every time the train stopped represented the street directly above us. I didn't even have to ask anyone. I know. I'm practically a New Yorker. And get this...the train didn't drop me off at the doorstep of my final destination. I had to walk a few blocks in the cool, smuggy, but very surreal New York air. It was awesome.

I think I felt the most at home in NYC when a middle aged woman boarded one of my standing room only subway car rides along with four mentally disabled adults. One of them, an African-American man with graying hair, was particularly smiley. I can still picture his big grin. For several stops, every time the train lurked forward again, he ignored the unwritten adult rule about not looking at other people on the train. Instead, his eyes searched for someone to celebrate with...because the train was moving again. It only took one shared smile for him to remember to look in my direction from then on. His fists pumped with excitement by the end. Mine didn't. But my heart grew a size or two. It reminded me of how exciting it is to have the garbage truck come by our house...on both sides. 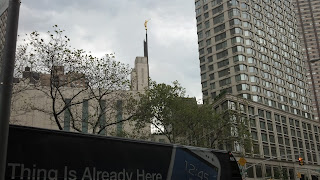 The only time I didn't pull my GPS out of my pocket was when I ascended the subway stairs in search of the Manhattan Temple. All I had to do was lift my eyes a little...and it was easy to spot.

The wedding of course was beautiful. Kirsten and Wil are a stunning couple...both such incredible individuals who will make a memorable mark on the world because their union increases their potential. Witnessing them begin an eternal path together refreshed my deep feelings of appreciation for the man who inspires me by his love and for God who completes our triangle so perfectly. 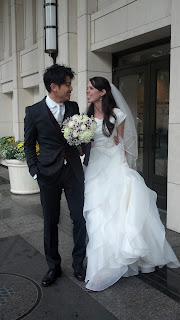 Here are a few views from the reception while on board the Lexington (where I ate a fabulous meal that I didn't prepare myself and uncharacteristically enjoyed the more than mild rocking of the boat on choppy waters): 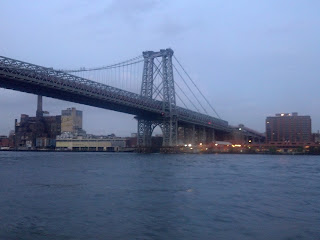 If I were a true New Yorker, I could inscribe the name of this bridge [here] as part of this caption...but isn't it beautiful nonetheless? 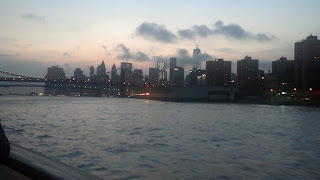 The partial Freedom Tower extends above the clouds. So symbolic. 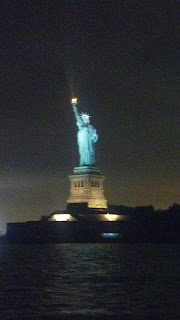 Absolutely breathtaking to snap a personal photo of this amazing woman! I dream of being like her...to stand as a symbol of liberty for my spouse and children that their true potential might be unleashed for good in this world. (Perhaps a future parenting/brain science post is starting to bubble... And I'll put in an order to my seamstress for a future Halloween costume. just kidding)

[Final Reflection]
I wrote most of this post while sitting in a New York apartment, listening to honks and screeches and sirens and whistles and shouts outside while the pouring rain washed Manhattan on Friday morning....and upon returning home, I naturally find it difficult to squeeze in a few moments to finalize the record of this memorable weekend.

I've learned New York City and I have a lot in common (feeding, taxiing, nursing, cleaning up after, and nurturing the growing lives of a ga-zillion people). I admire NYC for managing so many people, for tolerating so much noise and chaos and doing so with such patience and dignity. In Central Park, in the Manhattan Temple, at the corner grocery store, in a new friend's quaint apartment, on the crowded subway...NYC absorbs life and is at peace. I felt it.

When the unusual westerly tailwind rushed me home an hour ahead of schedule on Saturday morning, giving my new 4-year-old an extra birthday memory, my two-day meditation melted into my own crowded city of 24/7 constant energy that swirls through ME...the mother of my home.

My senses can absorb the sights, smells, and sounds...the high-pitched voices and slobbery kisses...the often intimidating chaos. My senses will keep my soul awake so my mind and my heart can appreciate life around me for what it is in each moment. And only then will chaos consciously transform into the joy and peace that makes life beautiful.

Yep. NYC and Me...we're like THIS [fingers crossed, heart swelled]. 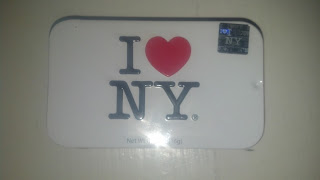 Behold the box of mints that now fills little tummies with such pleasure.
Posted by Amy at 10:28 AM