The Passing of the Bow

After watching out the window (or waiting while perched on the front steps) for the “package truck” to come for DAAAAYS…he finally came!!! And he was greeted by children who spotted him around the corner and ran out to snatch the odd-shaped package from his hands while he was also delivering something to Harry’s house across the street.

The package was ripped open… 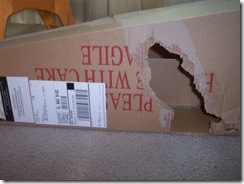 This is what happened to the box.

And once the 1/4 size violin was carefully unwrapped, Kirsten officially passed her 1/8 size violin (with bow included) on to Allison.

Kirsten’s pre-school now includes violin lessons. (And did I mention we get FREE pre-school here at the Smith house??!!) 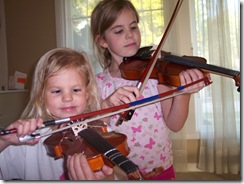 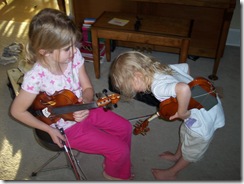 …Not forgetting the all-important “Bow-to-the-Teacher” at the end…Allison is a wise student.

And we now have a quartet! (Diggy has inherited Ken’s smaller cello and prefers/enjoys exploring his new instrument informally. Kirsten and Ken have been taking formal lessons for about a year….and love it!) It’s quite entertaining to listen to them “practice” together. 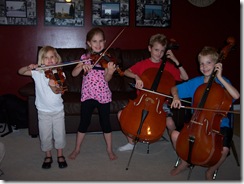 And Cienna anxiously waits for someone’s bow to get officially passed on to her…whose bow will she get?? 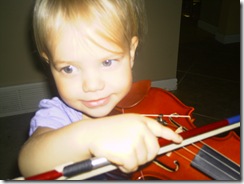 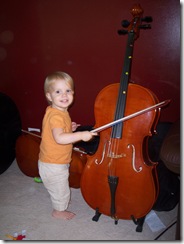 Posted by Smith Moments at 6:29 AM

So cute!! My heart pitter-patters seeing these young kids enjoy music so much! Gabe would be very jealous of that 1/8 violin.