So Kirsti's brain is grasping reality more and more every day. I can tell because she continuously asks realistic questions that have direct impact on her future. For example, "Can Santa really go to every person's house in one night?" (Thus, we've shared the ins and outs of folks like Santa and the Tooth Fairy with her. She gets that parents want to give anonymously from time to time.)

Kirsti thinks a lot about how she'll handle the future and I can see her wheels turning as she tries to prepare herself for what's ahead. Smart girl. (a sign of being in the Accountability Stage)

After looking at our wedding album recently and reminiscing about Aunt Bridget's bridal shower, Kirsti had an important question for me this last week:

"Are there any secrets that moms tell their daughters before they get married?"

I sensed a need to summon all my attention for this one.  "What do you mean by secrets?" I asked, trying not to sound nervous.

"Well, I know that the boy and the girl can make a baby after they get married. Are there any other secrets that you're going to tell me before I get married?" She sounded urgent...hoping I wouldn't wait until the last minute to share important information with her. (which I wouldn't do, of course ;)

[Yep. This was definitely a good time to use my prefrontal cortex to become present-minded as quickly as possible and review a few facts for a split second before answering wisely: I knew she already knows that private parts are important for making babies and that when a boy and girl are mature enough, their sacred, private body parts contain the tiny cells that will create and nourish a new little person. We've scratched the surface on putting the pieces together...and apparently here we go into a much more detailed discussion on human sexuality. I'm okay with that. I'm ready.

But then I also remembered: A child's brain doesn't think the same way an adult's brain does. Let's make sure we're on the same page. Jumping onto her wavelength to lead her along is always a waaay better idea than whip-lashing her onto mine.]

I turned my heart and my eyes toward her. "I can tell you everything I know about getting married when the timing feels right. Is there something specific that you're worried about?"

"Well...if I want to get to someone's house...how will I know how to get there?"

[Not at all what I was expecting. Her innocence caught me off guard for a second...but then I recalled that she'd asked a similar question while we were driving together recently. Evidently, she'd concluded that married people seem to know where they are going and she didn't want to eventually become the only spouse in the world who was clueless about navigating around town. Makes sense. It is worrisome to feel lost. I should have reassured her that there are lots of married people who still need to ask for directions. But I didn't go there.]

We spent the next 30 minutes typing in addresses on Google Maps, discussing N/S/E/W, and acting out which direction we'd turn at each corner on the way to her friend's house.

Questions drive much of the education around here. Questions are an indication that the mind is ready to really work at soaking in new information...and actually put it to good use or permanently store it...instead of letting it drift back out into space without hardly acknowledging its existence.

If I'm not too distracted, I notice my children's questions and jump at the opportunity to foster learning at these keys moments when they are naturally most ripe for it.

"Now you'll be ready to go anywhere you need to go after you're married," I stated confidently. [wink and phew]

She was relieved. And we checked geography off our list of weekly goals.

We'll brush up on human sexuality another day...well before her wedding day, for sure. 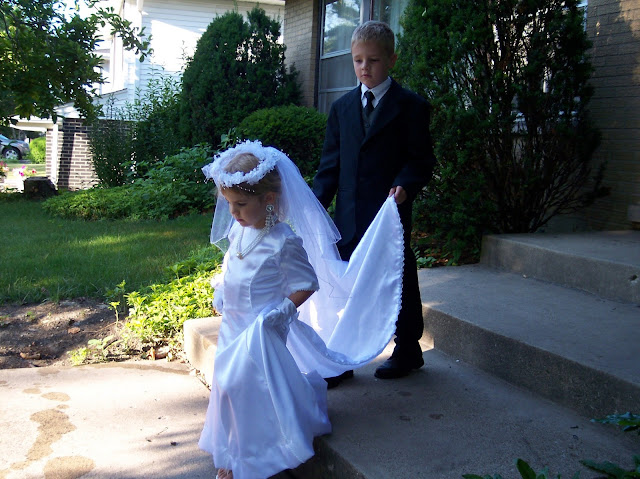 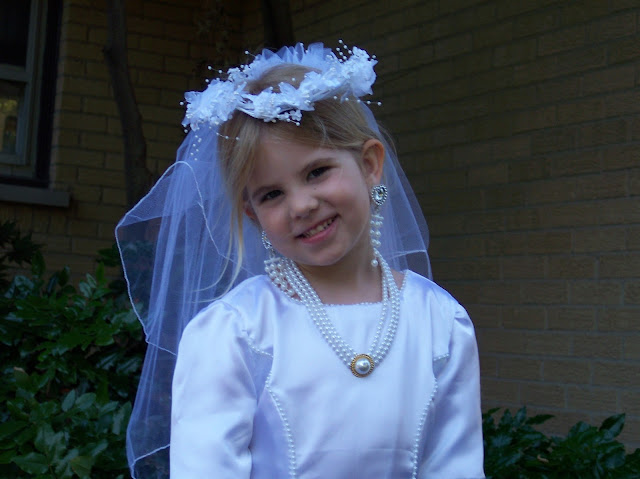 Kirsti's been wedding-planning for some time now. She asked Grandma to make her a wedding dress for her 4th birthday a few years back (pictured above). She googles 'wedding dress designs' regularly and now she knows how to read a map. She'll be a very beautiful (and well-prepared) bride some day.
Posted by Amy at 4:51 PM