A few weeks ago when we announced the upcoming cultural opportunity of hosting four 14-year-old Japanese boys in our home, our children couldn't hide their nervousness about having foreigners in our midst...

Now that they have come and gone, I can proudly share that our heart-warming memories far outweighed our worries. In fact, the only legit worry was that they indeed spoke very little English and could understand just a few of our words. 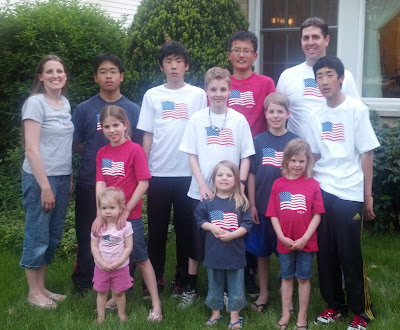 So, I got to thinking...Language neurons are only a small section of our brains, but boy did we discover their significance when Nozomi, Takahito, Raigo, and Shinya were here.

When people grow up in different parts of the world, or maybe just down the street, their brain cells that are responsible for speech align to learn whatever language is spoken in their individual household. As the years roll on, the mouth not only learns how to form sounds specific to certain languages (or not) but also figures out when to use them to communicate needs and wants and observations and feelings. Unused neurons are eventually pruned away to make room for stronger and more efficient communication connections with the neurons that are in highest demand.

I learned this last week that most of my Japanese-speaking neurons are long gone. The Japanese language uses sounds that our English-speaking mouths could only produce if we were clearing our throats or yawning. We also learned that "Smith" is probably a little less common of a last name over Japan...the 'sm' and 'th' sounds seemed unpronounceable by born and raised Japanese tongues. Our visitors felt way more comfortable calling me 'Amy.'

Does any one else get goose bumps when contemplating the parenting significance of this neuro-scientific phenomenon?

Anyways...We realized pretty quickly that even though we wondered what their families were like and what they wanted to be when they grew up, carrying on a conversation much beyond 'hello,' 'good-night,' and 'thank you' was out of the question.

On a few occasions, I needed to find out some important information like, "Do you want to eat pizza for dinner?"

Their eyes would narrow as they paid such close attention to the movement of my lips. After a few minutes of exchanging Japanese words amongst themselves, clearly trying to decode and jointly agree upon what I was saying, I resorted to pulling a picture of a pizza up on the computer and started miming what we normally do with it.

And thank goodness for the Internet...we discovered that our favorite Friday night meal (pizza) was not their idea of a yummy dinner at all. I then wisely used Google Translate to ask them what they wanted for dinner instead of pizza.

"Yes!" they all said together. Our eyes shared a mutual excitement and we exchanged a round of high-fives...not because we were thrilled to eat hamburgers for dinner, but because we had successfully skirted around our stubborn native language neurons that threatened to keep us from understanding each other. (When the excitement died down, I Googled 'image of hamburger' just to confirm that we were truly all on the same page. phew) 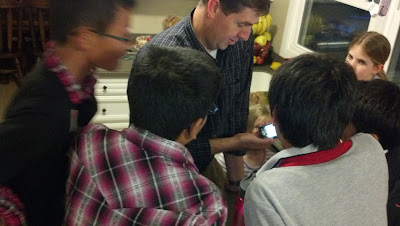 <Google Translate became our go to app for the weekend. But even then, we got some pretty confused looks sometimes. I wonder what we told them on a few occasions...>

Despite the huge language barrier that sat like an elephant in the room for four days, we creative humans used the rest of our brains to find alternative ways of socializing and sharing and caring.

And whenever we discovered a barrier-breaker--something that transcended spoken language to connect us with our new Japanese friends heart to heart--a lovely, very tangible feeling floated through the air and bonded us together.

We have a house full of instruments. After lugging their suit cases up to their respective rooms and after the energy level associated with the initial exploration of our American domain returned to normal, we sat down together in the living room. Since we couldn't shoot the breeze, a spontaneous concert erupted. 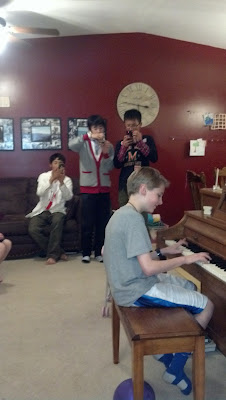 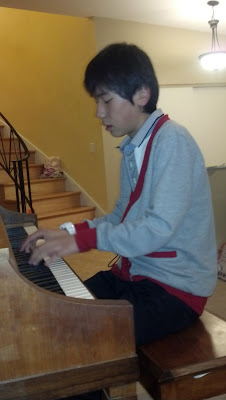 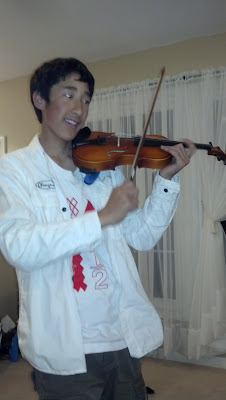 And when we heard their whole group sing in their native language at the farewell party, their voices rang loud and clear and contained more confidence than I'd heard at any other time during their entire trip. I was moved to tears. I'll never forget how universal the language of music is.

These are global concepts as well. And in most cases, they don't require very many spoken words.

As 6'+ Trey entered our church gymnasium for a scrimmage game on Saturday morning to help us fulfill our students' wish of playing basketball in America, only ooohs and ahhhs and bulging eyes and dropped chins were needed to communicate. When he did a dunking demonstration, students from several host families lined up at center court to permanently capture the amazement. We think they thought Trey is related to Michael Jordan (but he's not). 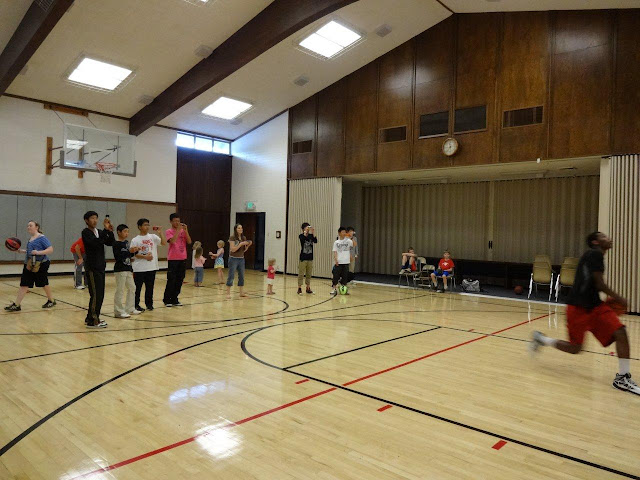 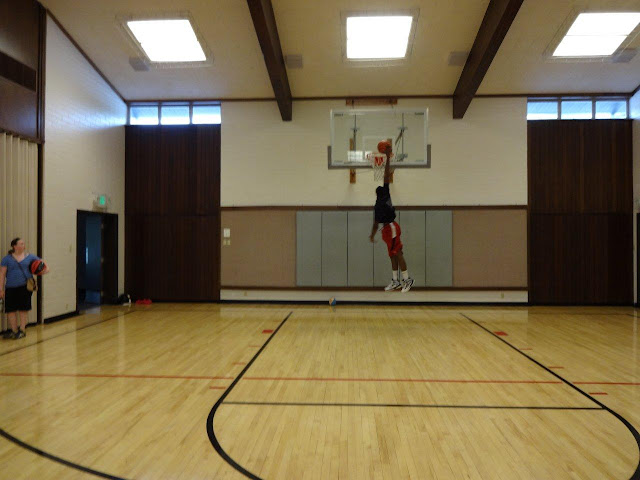 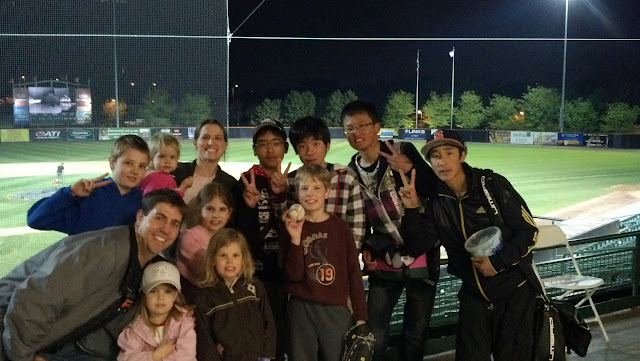 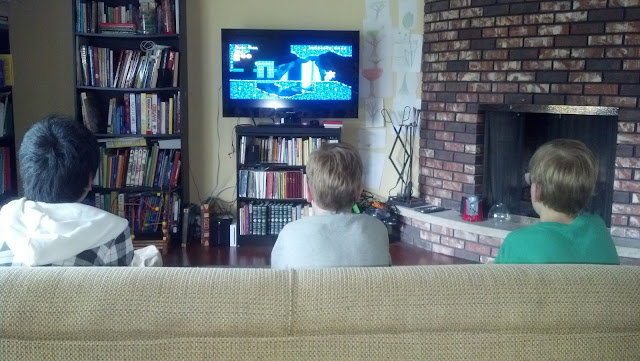 <Wii fits in the sports category, don't ya think?> 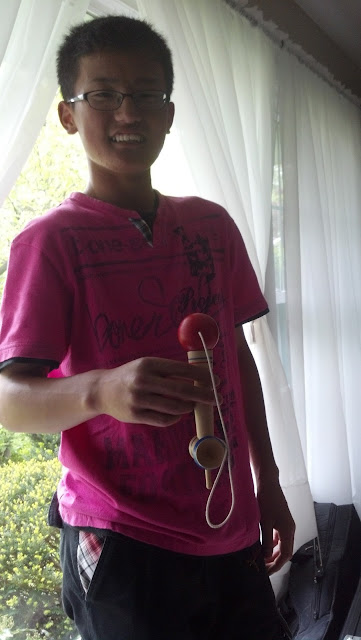 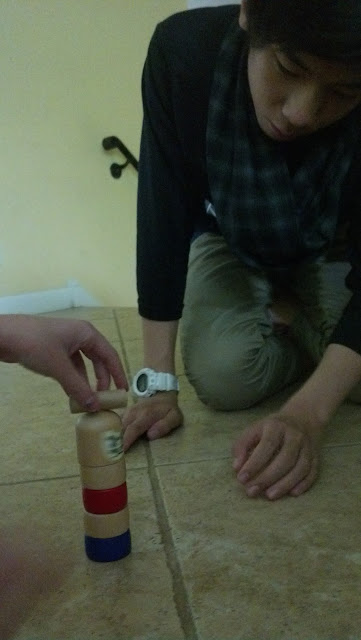 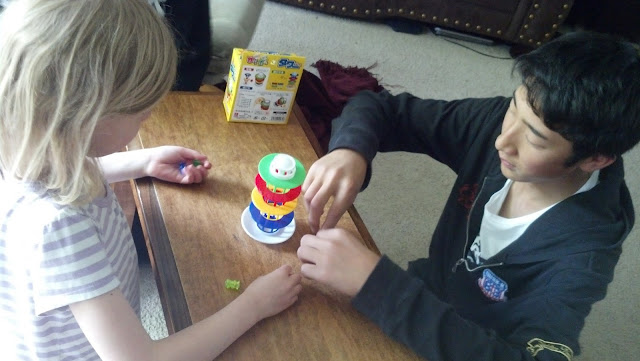 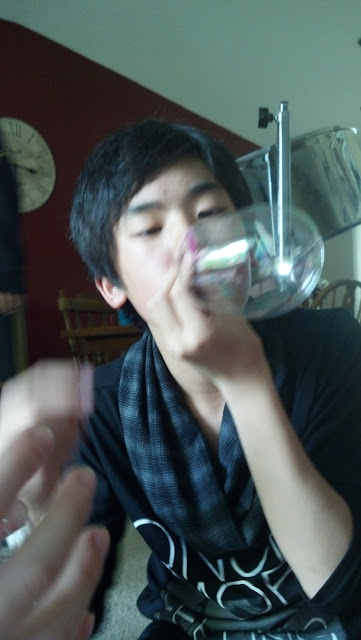 <The Boys brought several Japanese games that entertained all ages. It was amazing to see that so many games (both American and Japanese) could be explained and played using so few words.> 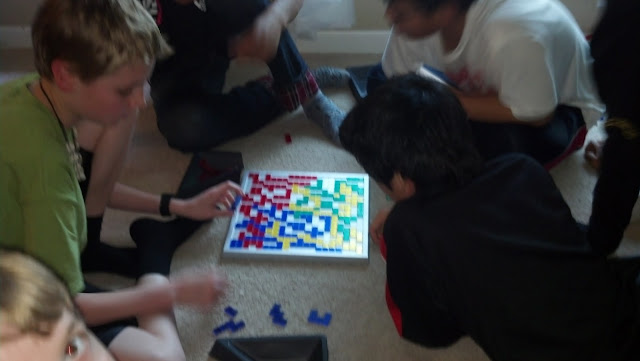 Fire and humans have co-existed in this world for a looooong time.
So it was no wonder that a few backyard flames produced grunts of joy and lots of smiles.
Adding smores offered a very educational and tasty American touch. 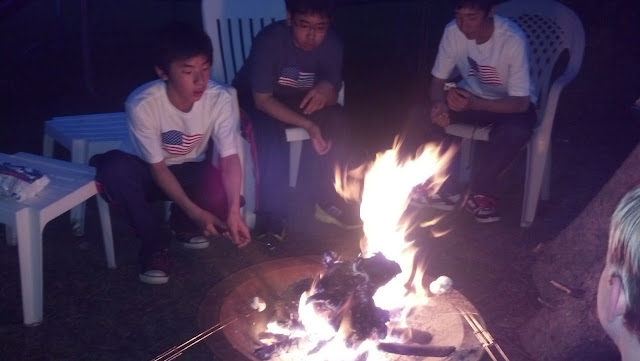 Instead of talking, we took lots of pictures...hundreds of pictures. Their cameras communicated to me what they wanted to remember about America...Trey dunking, the mall elevator, fireworks, street signs, glow lights, quesadillas, the trampoline, and our children singing and laughing and flashing the peace sign...very insightful. (Our children started putting up two fingers in pictures because they noticed that our Japanese friends did that for every picture...Is 'two-fingers' a universal peace sign? Or does it mean something else in Japan? Or is it just a teenage fad? Does anyone know?)

When cameras flashed and fluttered, so did our hearts. We somehow knew we were all thinking the same lovely thoughts...Life is awesome. We knew the good times were rollin'. We knew we were experiencing bonding moments that would now be recorded forever. 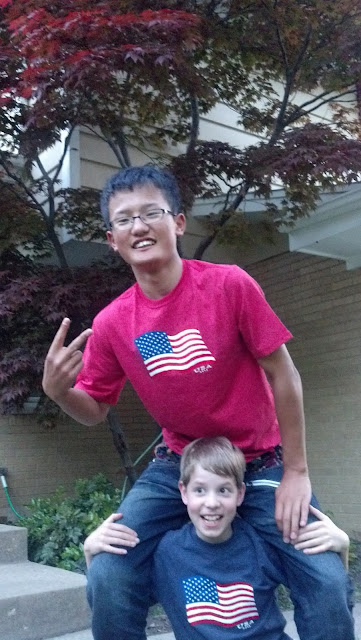 We had it easy at our host house. We have lots of little people to bridge the gap between communication awkwardness and interactive bliss.

None of our four visitors have a sibling younger than age 11. So, not only were our children worthy of hundreds of pictures because of their blonde hair, but also because they acted like children...a very unique experience for those who don't see it often.

Our Japanese visitors were eager and kind in interacting with each of our kids. (We feel so grateful for that!!) And all of the Smith kids (even MaryAnn by the end...which would surprise those who know her well) jumped right in with enthusiasm and thoughtfulness to naturally blend cultures. Watching them all interact together, you'd never know that they had expressed any nervousness beforehand. 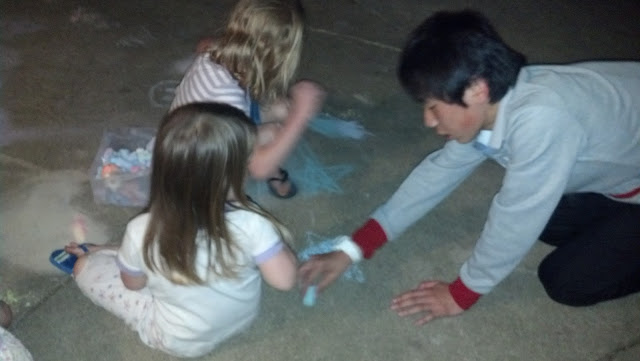 After the first night, my 6-year-old Allison said, "You don't actually have to know how to say their names. You can just go up and talk to them."  I wish I could've recorded her sweet voice saying that. Those precious words summed up our whole experience.

Honestly, I think the students truly appreciated that our younger children talked with them often and openly as if it really didn't matter that no one could understand each other...because it didn't. On several occasions, I heard Cienna talking away with one of the boys the same way she carries on conversations with her stuffed animals...imagining a response and continuing onward. The boys always smiled with delight and snapped pictures. So different for them than speaking with an adult...so little pressure when a child is around.

I think they loved that our older children showed a genuine desire to just hang out with them even though very few words could be exchanged. They could still comfortably play catch or basketball or soccer or frisbee or jump on the trampoline or draw with chalk...the possibilities were surprisingly endless.

And last, but not least, I know they felt grateful that our children were better than we were at understanding the few words they did try to speak in English.

As we were saying good-bye, Shinya came running back and through a very jumbled mixture of Japanese and English words and lots of motions, I could tell he was clearly trying to ask me a question. I stared blankly and noticed that my mind was solely focused on the worried thought that I had no idea what he was trying to say. Eight-year-old Kirsti, carefree and open-minded, guessed a few words and finally stated, "I think he's looking for the strap that goes around his suitcase." When I motioned for him to come look in our van, he showed obvious relief that his charades were at least communicable to a child.

Yes...children are barrier-breakers in a big way.

Our visiting boys surprised and spoiled us with authentic Japanese chop sticks, fans, games, origami, inflatable paper balls, ceramic cups, and lots of tasty treats. The picture below only shows a small portion of the treasures they brought. I marveled at how humans all around the world create useful and meaningful things...different from each other, but also the same. 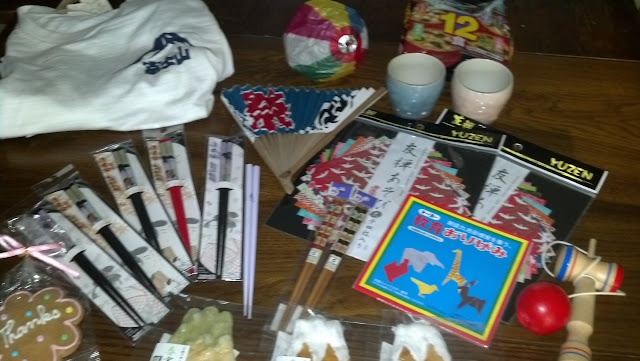 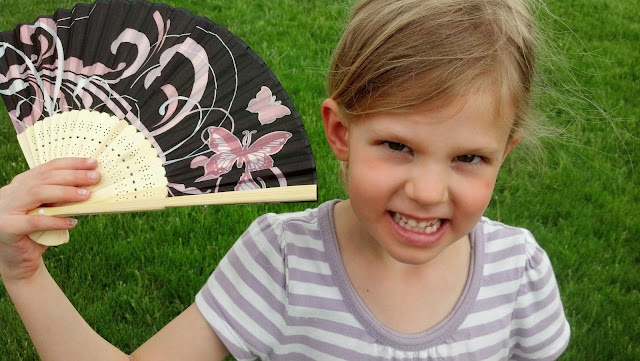 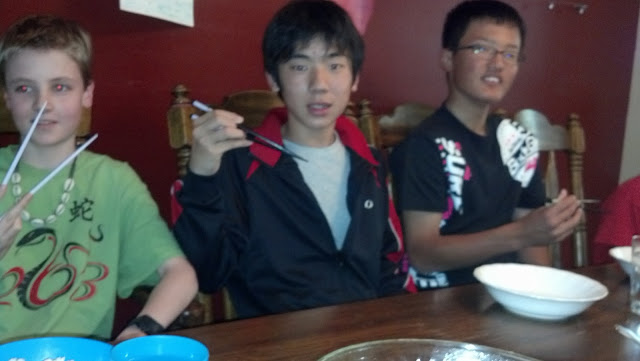 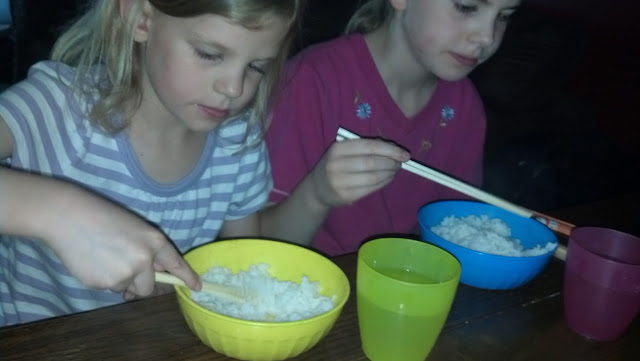 <I think the chop sticks fad will last a long time around here. Personally, I'll never forget how thrilled the Japanese Boys were when we fed them rice. >

We sent them home with some typical American party surprises: 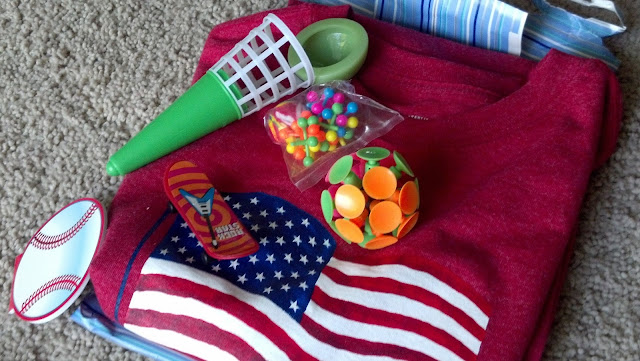 <You know those little hollow half-circles that you turn inside out and then they 'pop'? I'm not sure if they have a name...but whatever they are, those little suckers were a huge hit!> 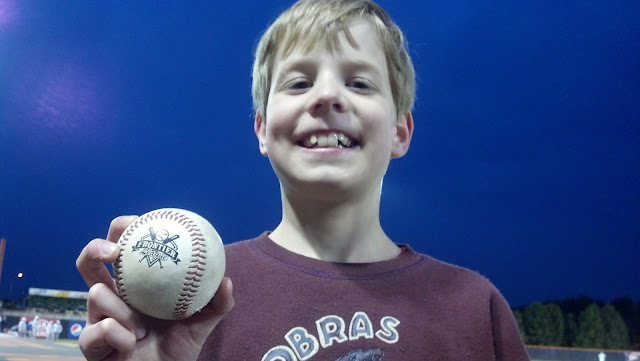 <Diggy actually won a scramble for a foul ball at the baseball game we attended. He deeply treasured it for several innings, had it signed by a few Boomers players after the game, and promptly gave it away to the Japanese students to take home as a souvenir. Love was in the air.>

Exchanging gifts with exchange students was a spontaneous way of sharing the uniqueness of our distinct cultures. Words weren't needed. We're not sure if we'll ever see our new friends again. We know they still exist on the other side of the world, going about their daily life like we are doing here. But will we ever cross paths again? Maybe. Maybe not. Thankfully, the gifts we have from each other will keep memories lasting well into the future.

And we did learn how to say, "Arigato!"

Conclusion
I hope our Japanese friends had as much fun as we did. I hope we sent them home with an honorable definition of what America is like. I hope their parents feel very pleased about raising such great boys. I hope our children will long remember what it feels like to discover similarities and create bonds with those whose tongues make different sounds. I hope I will continue to look for and appreciate and use the many language barrier-breakers that are all around us because they can communicate love...often better than words.

ps: dispensing water out of a refrigerator was very exciting for our Japanese friends and therefore must be very American 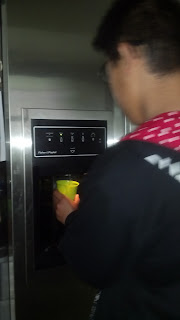 Posted by Smith Moments at 5:02 AM